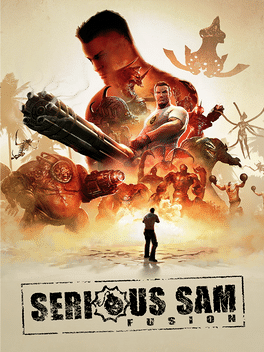 Serious Sam Fusion 2017 brings several Serious Sam games developed by Croteam to the latest in-house tech! Serious Sam Fusion 2017 is also a central hub for existing (and upcoming) Serious Sam games that will enable seamless integration of new engine features, patches, and upgrades. Games available in Serious Sam Fusion 2017: - Serious Sam HD: The First Encounter - Serious Sam HD: The Second Encounter - Serious Sam 3: BFE - VR versions of all games are a part of Serious Sam Fusion 2017, too! What does it do? Serious Sam Fusion 2017 enables a lot of cool new features, like a common workshop and cross-game mods. All of the games can be started from one application, so you can jump between playing The First Encounter level to a Serious Sam 3 level and back without exiting the game. When listing game servers, servers playing TFE, TSE, SS3 – will all appear in the same list and you can vote map across games if you want. Oh, and owners of our VR games are able to play multiplayer together with their "flat" counterparts! Since there are so many changes and exciting new features, we'll just go ahead a list them here as bullet points. Cool new features in Serious Sam Fusion 2017: - All games now support SteamOS/Linux/OSX! - Split-screen! - 64bit executables - Support for Vulkan API (DirectX9 is now being removed) - Multithreaded rendering - The new "light-weight" savegame system - savegames are now saved much faster, are very small and stored in the Steam cloud, and savegames still work even if a level is changed in a patch, or if a mod is updated - Full support for all controllers including Steam controller, PS4 gamepads, all older DInput joysticks - Proper multimonitor support - Borderless window support - Customizable sound outputs - Proper 3D audio using a proprietary sound-mixer (the same approach as used in the old Classic games) - Improved physics engine with better handling of character movement - Texture streaming in all games - Much better modding support with customizable weapons and items, improved scripting (including better support for scripting networked games) - Lots of other improvements, optimizations and fixes