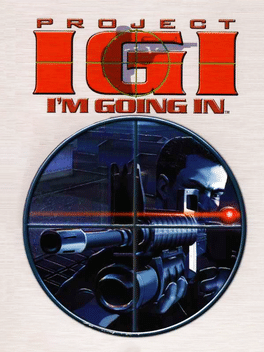 Project I.G.I.: I'm Going In (released in Europe as simply Project I.G.I.) is a tactical first-person shooter developed by Innerloop Studios and released on December 15, 2000 by Eidos Interactive. It is one of the first computer games to feature realistic weaponry and tactical combat situations. Pursue and defeat a homicidal ex-Russian Colonel before she turns Europe into a nuclear wasteland in Project IGI: I'm Going In. This first-person shooter emphasizes stealth and guile instead of massive firepower. Jones has to sneak into the toughest military installations in Eastern Europe, and once inside, use his skills in thievery, computer hacking, sabotage, and reconnaissance to stop the madwoman. The enemy's Artificial Intelligence will react to his every action and use military tactics to track his position. In order to counter its surveillance, bunkers, tanks, and gunships, Jones is equipped with NATO spy gear and assault weapons. If the odds get stacked too high against him, he can call in a napalm strike via his Map Computer. Upon release the game garnered mixed reviews due to a number of shortcomings, such as poorly programmed Artificial intelligence, lack of a mid-game save option, and the lack of multiplayer features. However it was praised for its superb sound design and graphics, thanks in part to its use of a proprietary game engine that was previously used in Innerloop's Joint Strike Fighter. It was followed up in 2003 by I.G.I.-2: Covert Strike.